In Phase 2, the program co-finances collaborative technological projects aimed at developing a new innovative product, process or service between companies from Chile, Spain, Austria, France and Belgium for an amount of $220 million (CLP). The official call will be in mid-December through the network’s web platform. 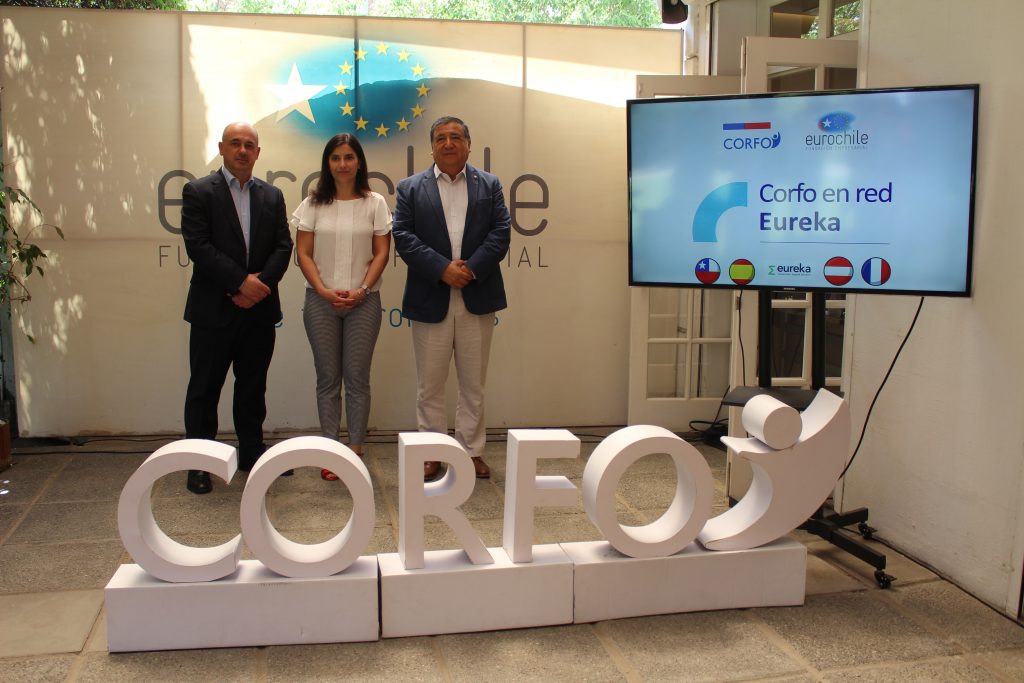 The pre-launch of the call of Eureka was carried out in Eurochile with the presence of authorities from Corfo, the Center for Technological Development and Innovation of Spain (CDTI), representatives of European embassies and national entrepreneurs. This network will allow Chilean and European companies execute joint innovation projects and apply for co-financing funds.

This activity is part of a milestone for Chile since, through Corfo, it rejoins this network of innovation agencies from Europe, the most important in the world in terms of promoting R+D+i in companies, after reaching agreements of cooperation with France, Spain, Austria and Belgium, after the last call of this network was carried out in 2020.
Corfo’s call that it makes together with these countries is to participate in the ‘network projects’, with a focus on the development of clean technologies such as green hydrogen, in order to face as a country, the challenges imposed by environmental problems, says Jocelyn Olivari, Corfo Innovation Manager.

“Chile is trying to develop innovative projects in a collaborative way with countries of the European Union and the novelty is that Belgium joins and that reflects the interest not only of this Belgium, but of other countries to collaborate with our country, which is seen as very serious and that it has tremendous potential in the development of clean technologies. Therefore, it must be highlighted, that there is interest from other countries to learn about what is being done in Chile”, she remarks.

Along the same lines, she recalls that our country has a coordinated institutional framework at a public level, and the Green Hydrogen Committee has been organized, which the current government has given continuity and depth.
“We have the challenge of exporting green hydrogen by 2030 and reaching carbon neutrality by 2050 and we see green hydrogen as a means where we have competitive advantages to promote the development of this industry”, she adds.

In this context, Eurochile’s role in supporting the identification of the ‘perfect partners’ within the framework of the call for network projects stands out. “It is important to identify which company is interested in your same project that can complement the capabilities and develop a much more effective initiative, and Eurochile is helping us with the vast experience it has. It has previously participated in Eureka projects and that is why we see it as a fundamental partner, especially in the first part of the process, where it is necessary to find the perfect match between the companies, since the development of a successful project depends on that” , she says.

This mission of bringing Chilean and European companies closer is at the heart of what Eurochile has always done, through the Enterprise Europe Network (EEN) where more than 600 institutions in more than 50 nations participate, and where all the countries of the European Union are part of.

“We provide a network that allows connections between Chilean companies and those of the countries that are part of Eureka and, this network provides the financing that enables the execution of the projects; therefore, we are absolutely complementary,” says José Aravena, Executive Director from Eurochile.

The call targets established companies that are a minimum of 18 months old, with some sales. Applicants can do it with an associate, that is, a research center, a university, or a technological institute, explains, Corfo’s Innovation manager.

“The beneficiary and final objective of this call are private companies that can always be accompanied. It is interesting when universities or research centers show technological developments that can be transferred to companies”, she indicates.

Chile has been for decades a suitable country for investment and business development with Spain. The relationship has been strategic and the possibility of continuing to bring the two countries closer is an opportunity offered by Eureka.

This is how Francisco Sánchez sees it, delegate of the Center for Technological Development and Innovation of Spain (CDTI), who in the event presented the different milestones that must be incorporated and taken into account in Eureka projects.

The representative from Spain agrees that Chile’s attraction for this call is in non-conventional renewable energies, green hydrogen and the agricultural and forestry sectors. In this sense, he points out that the CDTI is already coordinating with the innovation agencies of the countries that participate in the network.

In fact, Spanish companies, are consulting the opening date of the call, since they are interested in working with business partners from sectors that they have estimated have potential in the aforementioned areas, he adds.

Regarding how to guide Chilean companies when it comes to identifying the perfect Spanish partner, he stresses that “as CDTI we can help them to identify them, but there is also a network with which we are going to work more closely, which is the Enterprise Europe Network (EEN ) through which those proposals that come up with concerns from Chilean companies will be circulated through the EEN, and in the case of the CDTI for those companies that have their focus on Spanish companies, of course we will be delighted to review them and be able to detect partners in Spain”.

The official launch will be in mid-December, when applications open on the Eureka platform and those interested enter the profile of their projects. Corfo will evaluate that the uploaded information is framed within the objectives of the call to develop innovative products, processes and services, which have an R&D component, which require the development of a prototype, technical validation and the potential to reach to the market within a maximum period of four years.

In this first stage, applicants must sign a collaboration agreement with another company from the participating countries.

The advantage that Eurochile offers is its work in these matters, which has made it easier for Chilean companies to connect with European counterparts since they participated in a B2B or fair organized by the foundation, which is a solid base to start on.

“What we are going to do is that when a Chilean company is interested in participating and who do not have a partner, we are going to transmit this profile through the EEN network and among the Eureka countries through their hubs; at the same time it can also happen that they write us from Austria saying that they have a company that wants to present a Eureka project and is looking for a Chilean partner. So, we do the task of looking for the national counterpart”, comments the Executive Director of Eurochile.

The platform will be receiving profiles until February 24 of next year and from that date they will be evaluated jointly by the innovation agencies of Spain, Chile, Belgium, France, and Austria. Confirmation will be given in March for the initiatives to apply for Phase 2 through the ´Crea y Valida´programme.

“In the second stage of the Crea y Valida call (Corfo programme) each project is presented in its country of origin. For example, the Chilean company will do it on the Corfo website, while its partner, if it is French, will do it on the BPI website, which is the simile of Corfo in France. The call closes in May and between June and July 2023 we decide together with the other agencies in the network which initiatives will receive the financing”, concludes the Corfo Innovation Manager.