Linnet Solway: “There are initiatives on going, but an ecosystem that brings together all the actors of the circular economy is missing”

The creation of this ecosystem, together with a vision and strategy that marks a clear direction for the adoption of this trend in the country, is the main objective of the Circular Economy Roadmap promoted by the Ministry of the Environment, CORFO, the ASCC and the Ministry of the Economy, and is led by the Eurochile Business Foundation. Today there are some isolated initiatives in addition to a series of gaps that need to be rectified, including collaboration between companies to address joint sectoral challenges, says the director of Eurochile’s Technology Transfer and Circular Economy Area. 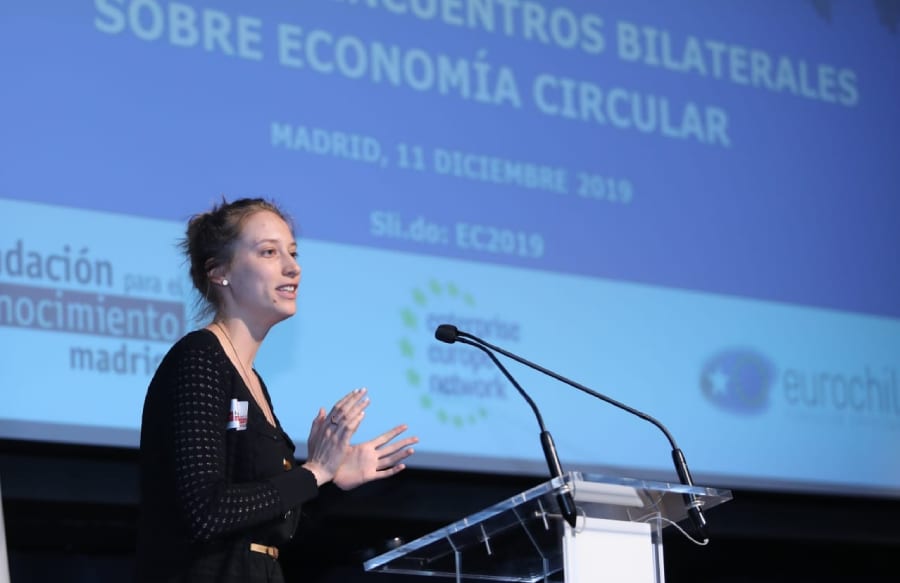 After three meetings and a little over a month in operation, the Strategic Committee of 32 companies, ministries, experts and academia -among others- that is supporting the creation of a Roadmap for the circular economy in Chile is beginning to generate more concrete the first lines of work, after a first diagnostic report prepared by Eurochile, who leads this work with the Ministry of the Environment.

Linnet Solway, director of Eurochile’s Technology Transfer and Circular Economy Area, explains that although this report shows that in Chile there are several initiatives and projects on going for the implementation of a circular economy, they are still being developed in isolation.

For this reason, she adds, “it is necessary to create a circular economy ecosystem that brings together all the actors in the transformation and promotes collaboration. In addition, a vision and a strategy are needed to give a clear direction for the adoption of a circular economy in the country. And that is what the Roadmap seeks to generate. ”

This becomes more important today, says Linnet Solway, because although the need to move towards more sustainable production and consumption models was identified before the pandemic, “today with the economic and social crisis the need to do so is further ensured by ensuring a transition for everyone and with everyone”.

The study shows a series of gaps to overcome for its implementation. Which do you think appear most relevant, and which should be prioritized?

One of the priority gaps is to redesign the waste management system, since today due to its structure, above all costs, it does not allow priority strategies in a circular economy, such as repair and recycling, to be competitive. Education is also a key aspect, so that the circular economy is understood as a model that goes far beyond recycling and that includes the adoption of new technologies, rethinking designs and processes and implementing new business models. Another important gap is collaboration, especially between companies, to address sectoral or pre-competitive challenges, and to establish industrial symbiosis and make more efficient use of resources. Another aspect that must be addressed is the need to take into account the territorial realities in the country for the implementation of appropriate strategies to local conditions.

How are you going to work this initial diagnosis in the Strategic Committee, what are the first issues that are emerging in the discussion?

An overview of the diagnosis was presented at a meeting with the Strategic Committee and the document was sent to them for review and comment. In general, the need to deepen certain aspects was highlighted, such as working metrics to measure circularity in the industry; incorporate supply and demand gaps for circular products, and also incentives; the obligation to use recycled raw material; focus on the population not only as a consumer, but also as a focus of education; and include a human vision oriented to ethical behavior as a society.

What are the regulatory changes that should be given priority to help boost the circular economy?

The current waste management system needs to be reformed, and the lack of regulations to organize efforts aimed at the circular economy from all sectors has also been highlighted.

How will this work be carried out, and what basic aspects will this roadmap contain, in the sense of directing the adoption of the circular economy in the companies – small, medium and large – of the country?

The work will be carried out very closely with the Ministry of the Environment and other institutions such as the Sustainability and Climate Change Agency and Corfo. Furthermore, it will involve key actors from the public and private sectors: various ministries, municipalities, union and industrial associations, NGOs and organizations representing civil society. We will accompany, guide and coordinate the development of a co-creation of the roadmap, through different activities, meetings and workshops, with the aim that the end of the consultancy is in the beginning of the work for the transition to the circular economy, and that each actor takes the roadmap as a starting point and begins to implement the proposed strategies. That is why the participation of the business sector is so important; they need to empower the roadmap to give it the continuity it requires.

What can Eurochile contribute to the discussion that will be generated in these workshops, and what can you learn from this process?

Eurochile can contribute with its extensive experience in public-private relations and generation of networks, since those are of the important gaps highlighted many times when talking about circular economy: the lack of collaboration and networking. Furthermore, due to its link and networks with Europe, the foundation can contribute knowledge, experiences, and success stories. Part of the foundation’s mission and vision is to contribute to the sustainable productive development of Chile. We see that the roadmap is a tremendous opportunity to enhance that change. It is framed in a very specific context today, with a Chile that is going through several crises, one social and one sanitary and human, that are making visible the flaws in our system. Today’s Roadmap for the Circular Economy is not the same as the one drawn up a year ago, it has the potential and the capacity to be part of the response to the crises we are experiencing. We want to use the instances of this project to help stakeholders to project themselves to a Chile of the future and visualize the necessary tools to respond to crises and generate social, environmental and economic capital for everyone, with everyone.

The creation of the roadmap will help formalize the ecosystem of the circular economy, something that Eurochile has been working on for a long time. What progress have you made in this regard, in Chile and in the region?

Will the circular economy be integrated into all Eurochile projects and work areas in the future?

Yes of course. We seek that the CE is a transversal line of action that is integrated in all the projects that are generated and executed, and in the internal and external activities of the foundation. We have to see the circular economy not as one more aspect in projects, but rather as one of the pillars on which we develop the project, along with issues of partnership and cooperation with Europe. This is how we are working today both in our ongoing projects and in the projects that we have in our portfolio.

How important is the transfer of technology with Europe that you can facilitate? Is this cooperation going to intensify?

Without a doubt, many of the low-carbon technologies that exist today have been developed in Europe, who are clearly at the forefront in this area. Therefore, for Chilean and regional companies that want to move towards the circular economy and decarbonization, there is an opportunity to transfer technology and knowledge from Europe to Latin America. The European Commission is promoting and financing several projects to promote this transfer. Corfo also has several instruments – technology centers, eureka, scholarships for internships – that promote the transfer of knowledge, especially from Europe to Chile.

At Eurochile it has always been pointed out that in this transformation the company plays a key role that this has to be a business transformation. How can this change be accelerated in companies?

The business sector is a dynamic, fast-moving sector with a high capacity for transformation and innovation, and therefore the company undoubtedly plays a fundamental role in the transition to a circular economy. To accelerate this change, the government must play an important role, through the development of rules and regulations that promote the installation of good practices and sustainable models within companies. Through incentives and taxes, the state can guide decision-making within the company. In addition, it needs to provide clarity regarding what is coming so that companies dare to invest in technology, training, R&D and innovation. Once the regulatory framework gives a clear direction to the business sector, the most likely is a fast and radical change in the production system. There are already large and small companies pioneering the implementation of the circular economy, and these are going to put pressure on the system once the rules of the game are clear to everyone.

Beyond the roadmap, what are the main activities Eurochile will have this year in the area of ​​Circular Economy?

In addition to the Circular Economy Roadmap, we are working with the circular economy working group, which we want to strengthen and grow this year. We are also working on initiatives to develop a network of stakeholders in the circular economy, at naional level and also -eventually- at the Latin American level, to create an ecosystem of actors for a circular economy. And this year, if the world situation allows it, we will also organize a circular economy encounter where we will have conferences, workshops and business rounds to continue promoting the transition to a circular economy and encourage the development of networks and collaborations between the actors in this transition.