Marco Segovia met with of members of the working group to analyze the experience and progress of the REP management systems in Europe, the way they operate and the advantages and disadvantages of one or the other. The important thing, he said, is that adaptation to each country must depend on its own economic, social and geographical particularities. At the same time, he recalled that for the advancement of the circular economy, this is just one of many tools. The workshop concluded with a conversation and exchange of experiences between Segovia and the members of the group. 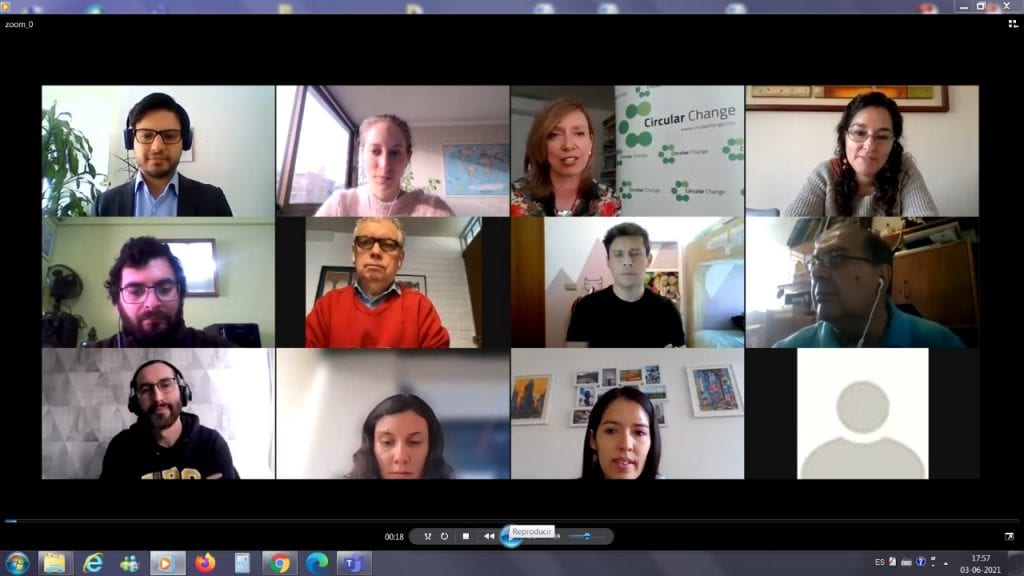 Within the framework of the activities of the Eurochile Circular Economy Working Group, in recent days a specialised workshop was held called “Implementation of the EPR Law, from Europe to Chile”, dictated by the international expert Marco Segovia, an environmental engineer who is part of the Circular Change organization of Slovenia and with extensive experience in the implementation of Extended Product Responsibility and circular economy systems.

The workshop, lasting almost two hours, was attended by all the companies that are part of the Working Group and was presented by Ladeja Godina, founder and executive director of Circular Change, and president of the coordination group of the European Circular Economy Stakeholder Platform (ECESP). In addition, Godina was one of the main international advisers for the Eurochile team in the preparation of the Roadmap for the Circular Economy.

During his presentation, Marco Segovia, revealed some key aspects for the implementation of the EPR Law that today is beginning to be installed in Chile, among them the need to consider that it is a system that is not static, but dynamic, which must be able to adapt to the changes and complexities that arise in its development.

“If you plan as a static system you are not building it for success, because it is going to fail, it is not going to work well. It must always be accompanied by periodic planning and re-planning, monitoring and traceability, which can help us improve the system that we have as a basis regarding what is happening within it, but also outside it”, he affirmed.

Among the obvious reasons for the implementation of the EPR are the reduction of the environmental impact of waste, and also a social impact in this matter. But there are others that are deeper and are not being mentioned so much, he stated: “Implementing the EPR and the circular economy helps us to give a holistic approach to the value chain, it helps us to understand it better, to optimize resources, and create opportunities and new business models, which allow us to create new markets”.

How management systems work in Europe

To illustrate this, he explained how some of the EPR systems in Europe are working today, where there is a wide diversity of modes of operation between different systems, priority products and countries. In the case of Germany for packaging, for example, the cost structure covers the entire chain. They are in charge of management, financing and rates, establish agreements and contracts with waste managers and municipalities, and periodically have to communicate data to a state agency. Like Chile, this system is based on sanctions to regulate the system, which can be up to 200 thousand euros if they do not fulfill their function.

“In the German strategy what we can see is that there are many competing management systems. And since it is a competitive market, producers can choose which management system to go to based on the market, and how much they should pay you. If one looks at the German case, what has happened since the 90s until now, is that they have known how to adapt and establish a continuous progress of the system. In the 90s the first system was generic in terms of material type, for example, and there was a single management system where the main focus was on separation. This has shifted in 2020 towards a more focus on ecodesign and quantity effectively recycled, with more competing management systems and with specific markets for each value chain. And we can see that now in almost all the countries of Europe, where there is a more information for each type of material”, explained Marco Segovia.

Going in that direction, said the Circular Change expert, the criteria have become severe, with more producers having to join the system, and it has been pointing towards ecodesign and prevention with progressive objectives, such as it also has the EPR in Chile. This has allowed the collection rate to go from 20% to 60% in the 90s -depending on the type of material- to values ​​that today exceed 80% in some cases”

“It is a case to watch closely,” he added, “because it has had progressive results, they have been able to implement the lessons learned in recent years, and the change from one management system to multiple competing systems, plus other additional measures, has allowed reducing the costs of collection and recycling, and also the amount of waste. So, it has also been successful in terms of prevention in the generation of waste”.

The case of Italy is different, where there is currently a centralised management system within which there are specific sub-organizations for each value chain. “What we can learn from this model,” Segovia affirmed, “is that the management system and the association of Italian municipalities signed an agreement that has been reviewed over the years and has allowed a successful dialogue between the public and the private. In this system, producers cannot choose in which system to pay, but for each product they have a specific consortium”.

“The important thing about this system – he added – is that there is good public-private cooperation, and it also includes citizens. And there is a surveillance and control body, where there is a total representation of the system. In this type of system there has also been a lot of progress. Since it was created, the paper product -for example- has gone from 30% recycling to 90%. And there is also a large population coverage, almost 100% (…) One of the things that differentiates this type of system is that there is a lot of participation, from schools, from youth and with great inclusion of citizens, because a lot is invested In communication. This has also helped to obtain a high quality of the recycled material”.

Among the risks presented by this type of centralised systems, he said, is the one that depends on the capacity of operation and management of the municipalities, and that -as in Chile- there are wide geographic and demographic differences in the territory, so that in some areas its implementation is difficult.

REP is just one of the instruments for the circular economy

Does this imply that there is one system better than another? No, Segovia said. The truth is that they are not comparable, because it must be taken into account that in each country the local context is very different economically, socially, environmentally and geographically. For this reason, she said, the most relevant thing is “to personalize and adapt the solutions to the specific case of each country, or each region, and also each value chain. In the case of Chile, for example, it is important to define which indicators to use to determine that the system we are using is the system we actually want”.

However, there are some factors and experiences that serve as considerations when defining the implementation of a system. For example, in the case of a system based on competition between players, it can help reduce monopoly risk, while providing greater market flexibility and driving efficiency and cost improvements. A centralised system, on the other hand, may be better in other cases because economies of scale are developed; it has greater simplicity and supervision, and potentially greater transparency.

There are also other factors – he added – that can affect the implementation and results of the EPR Law, such as user behavior, citizen participation, effective communication, and the impact and cultural evolution, as well as taking into account the cost of the system to the citizen.

Despite the advantages of the implementation of EPR systems in Europe, and the success that they have had first in reducing the impact of waste and today in preventing its generation thanks to tools such as ecodesign, Marco Segovia reminded those attending the workshop that “for the transition to the circular economy we have a group of instruments, and the EPRis only one. For a successful implementation of the circular economy we also need many other measures that help us achieve the objectives we want, and we have seen this in the Roadmap of the Circular Economy of Chile”.