The head of the Circular Economy Office of the Ministry of the Environment, Tomás Saieg, was invited to the meeting, who presented the main guidelines and progress of the different activities that are being carried out. 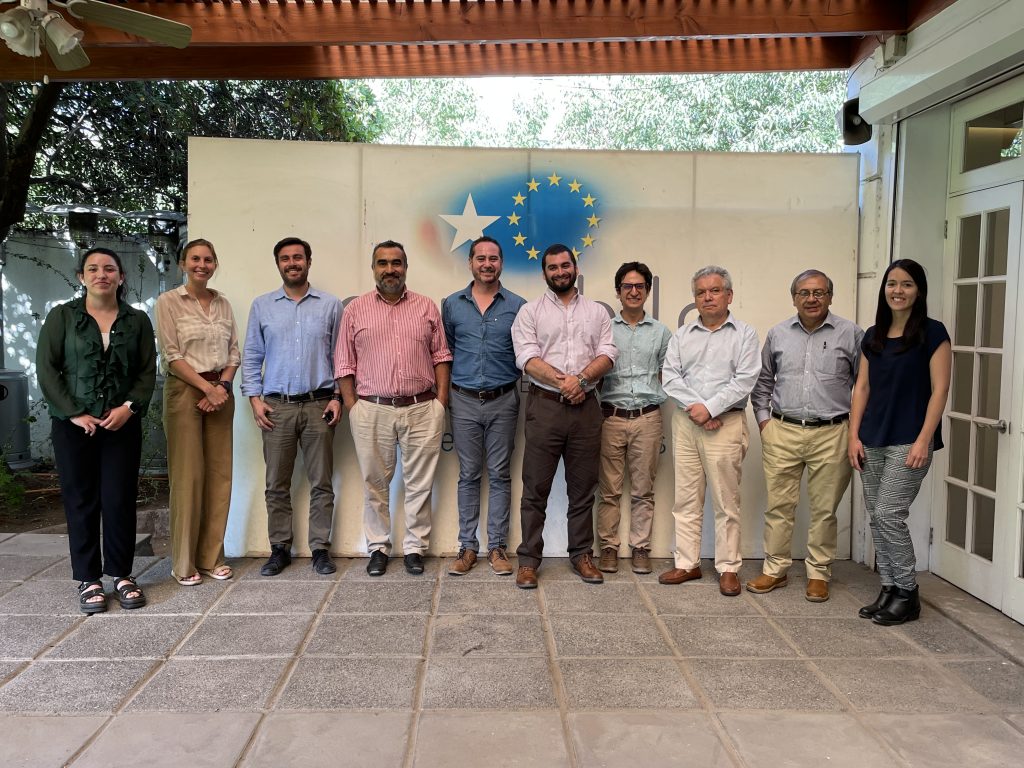 The Sustainability and Circular Economy team of Eurochile Business Foundation had its last meeting with the ten members of the Circular Economy (CE) working group, with the aim of saying goodbye to 2022 and talk about the offer of services and new training spaces to which its beneficiaries will have access in 2023.

Enrique Sánchez, director of Sustainability and Circular Economy at Eurochile, welcomed the attendees, and Javier Mora, in charge of projects for the area, reviewed the actions carried out this year, highlighting among them, the updating of the mission and vision of the group, the return to face-to-face and the connection with actors such as Enel, Sofofa Hub and the Ministry of the Environment.

The companies that are part of this group are: Bases, Indunext, Epyral, ICP Engineering, Cav + Sustentable, Watgen, Ecology in your Neighborhood, Ecology and Multiplastics.

The vision for 2025 was outlined, which in essence points the group of circular SMEs as the most relevant in Chile and internationally recognised for its role in incorporating the Circular Economy as the basis for the development of SMEs. Meanwhile, the new objectives will go in the direction of implementing circular economy strategies and their business models, promoting a systemic transformation in Chile, as well as connecing the group with relevant actors from public and private institutions and, collaborate and create Chilean-European synergies between companies and relevant institutions in the circular economy.

In line with these strategic changes, the areat of the Sustainability and Circular Economy of Eurochile will strongly promote access to new knowledge; collaboration with European institutions in the transition of SMEs to CE through programs such as the Enterprise Europe Network (EEN); dissemination of the group and SMEs; matchmaking events, to be held nationally and in person, and with the possibility of attending, on demand, events in Europe, in a hybrid format.

Javier Mora highlighted as a novelty the possibility of using the Chilean-European Business Center that is located next to the Eurochile offices. “The idea is to reactivate this center, to facilitate this work space so that the companies can have a well-located place”, pointed out Mora.

Regarding access to new knowledge, this activity will be part of the monthly internal meetings, where experts on different relevant CE topics will participate. This will be complemented with ecodesign and internationalisation workshops.

In the work of connecting with Europe, the foundation will invite relevant actors -such as Circular Change- to the meetings to address issues of interest. The Sustainability and Circular Economy area will manage internships in European institutions, access to EEN network services, such as uploading profiles to search for experts or solutions in Europe, participation in missions, schedules of visits to technology centers and/or similar with a focus on CE.

During the meeting, the schedule of actions for the next year was presented in detail. In March, members of the network are invited to a Circular Change workshop, and in April they will meet with a European expert. In that month, the foundation will hold an Open Day with companies and institutions in order to disseminate its work and encourage the participation of new partners.

In May another training will be carried out with Circular Change on a topic to be defined and in June a thematic meeting and a workshop on ecodesign and its implementation in value chains will be held. In July there will be an internationalisation workshop with the director Enrique Sánchez and in August a new Open Day. In September, like the previous month, a thematic meeting will be held, and an internationalisation workshop will be added. Thematic meetings are scheduled in October and November and in that last month the theme of the workshop is yet to be defined and the closing meeting of the year is set for December, where it is evaluated to do so within the framework of a seminar.

Connection with the CE Office of the MMA

In the second session of the meeting, Tomás Saieg, head of the Circular Economy Office of the Ministry of the Environment, intervened, as was considered within the group’s actions this year.

The professional explained how the work areas are structured, highlighting the regulatory agenda where the legal bodies and decrees of the Law of Extended Producer Responsibility and Promotion of Recycling (EPR Law) and programs such as “Circular Communes” were borne within the framework of the National Organic Waste Strategy.

In this context, Saieg said he expected the Executive’s organic waste bill to enter Parliament in January or in March of next year, which “seeks to move towards a management of municipal organic waste, establishing obligations for the municipalities”. The management alternatives can range from a door-to-door collection truck or a home composting program, the authority specified.

The project is also aimed at restaurants, stadiums, or free fairs to take charge of this type of waste, Saieg added. In turn, the legal initiative gives responsibility to regional governments and municipalities to prepare waste plans and the legal figure of the Executive Secretariat for Waste and Circular Economy is created, which will bring together different public services to coordinate this task.

Regarding financing, the project proposes a tax on the cleaning fee, targeting non-municipal waste (non-hazardous industrial). Saieg specified that “originally it was going to go to the organic project, but later we had conversations with the Ministry of Finance, and we are looking to see if we can make this proposal as well in the corrective tax package.”

The head of the EC Office of the MMA also reported that this summer the proposed regulation of the Single-Use Plastic Law should be ready in a citizen consultation version. Regarding the decree on lubricating oils, Saieg announced that it could leave the legal unit of the ministry during the first semester of 2023 to be admitted to the Council of Ministers for Sustainability and Climate Change. Lastly, he estimated that the final version of the decree on goals for batteries and electrical and electronic devices would be available by the second half of next year, since currently “we are working very hard on the observations that came to us from the citizen consultation.”